In the small Dutch community of Zeewolde, just outside of Amsterdam, rumours are circulating fast that a major American tech company is planning to use 166 hectares of farmland to build Europe’s biggest data centre.

Although details surrounding the project are scarce, there is evidence to suggest that US social media and tech giant Facebook is behind it, the construction process will employ some 2,000 people, and support “several hundred” permanent staff once operational.

A news report released earlier this week by Dutch news outlet AD has assembled compelling - if circumstantial evidence that Facebook is the company building a hyperscale data centre in this sleepy farming community. Facebook has declined to issue an official comment to news outlets at this time.

The report spoke with several farmers from the area, who claimed that four local families had been approached with an offer from an employee who only provided her first name. “She spoke to us in English and only her first name was mentioned, so we couldn’t go away and Google which company she works for. That’s probably why they didn’t use a Dutch employee,” one of the farmers, all of whom wish to remain nameless told AD News journalists.

Farmers also implied that the offer to buy their land wasn’t presented as a choice. “There doesn't really seem to be a choice. You can fight against the arrival of that data center, but in the end you’ll lose that fight,” he said.

A giant in the low country

While it’s not yet certain what kind of facilities and capacity the new Zeewolde centre will have, the size of the land parcel that has been approved for development points towards a facility with the potential to be the largest in Europe, and a strong contender for the top 10 largest data centres in the world.

One of the best data centres in the Netherlands that we can use to compare the Zeewolde development to is Google’s Eemshaven facility, which located at the most northerly point of the country, and a two hour drive from Zeewolde. Eemshaven is a 30MW facility located on a 44 hectare parcel of land - although a recent $1.1bn investment has reportedly boosted capacity and expanded the land grant to around 77 hectares.

The new facility would be more than twice the size of Google’s facility, and could conceivably put out record-breaking capacity.

One way to get an idea of the scale of this facility is to look at the power infrastructure surrounding it. AD spoke to German energy supplier Tennet, which revealed it has been contracted to build a new high-voltage power station for the centre in Zeewolde. A source at the company noted that the process has been much quicker that they’re used to, which is creating difficulties. “You don't just kick up such a new power supply,” said an employee of the company to AD journalists. “The licensing process can take five to six years. Then such a data centre has been built for a long time. We would like more direction.”

Tennet is also involved in another large-scale renewable energy production project in the Zeewolde area. In October 2019, a large-scale refit and modernisation project began on the highest capacity on-land wind farm in the Netherlands, a few kilometres from the proposed site for the new data centre. The Zeewolde Wind Farm is a repowering project whereby 220 old wind turbines are being replaced by 91 new and more powerful 3,9 MW turbines. According to a report, the replacement of the old turbines with more powerful and efficient new turbines will result in almost three times more electricity generation.

It seems unlikely, in light of more recent announcements, that the Zeewolde Windpark will be the largest capacity project in the country, although its proposed footprint of more than 300 square kilometres still makes it the largest in terms of sheer scale. A recent report revealed that the facility - which is being developed by Vestas and Rabobank - will have a capacity in the realm of 322MW.

“I am excited that our new client Windpark Zeewolde BV has chosen Vestas as a partner for such a unique wind energy project in my home country. It is a great step for the supply of renewable energy in the region and, together with our partners We hope to reactivate the largest community wind farm in Europe, which is also the largest onshore wind project in the Netherlands,” said Nils de Baar, President of Vestas Northern and Central Europe.” Leveraging customized wind power solutions with the Lower leveled energy cost, this repowering project, which more than 90 percent of the nearby community supports as shareholders, will almost triple annual energy production.”

The best clue to the identity of the mysterious American corporation behind the Zeewolde project are the plans submitted to the Zeewolde community planning department. 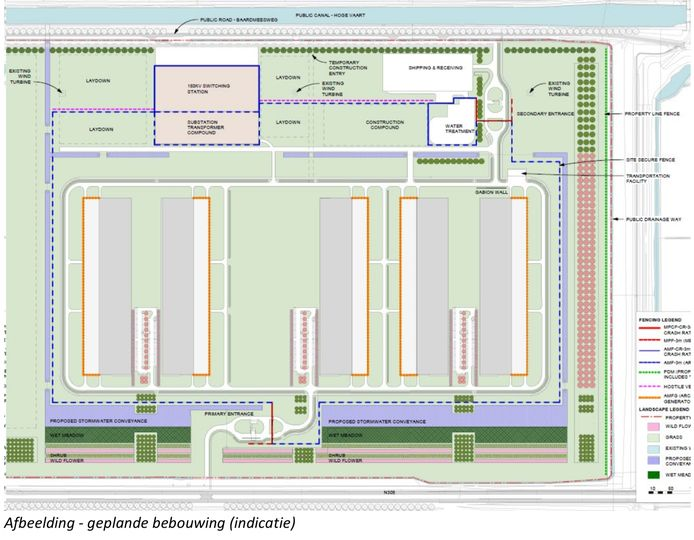 The plans, which were recovered by AD journalists, detail several buildings comprising a hyperscale facility with a single access road that has an unusual looping design. Given the usual suspects for a facility of this scale include Microsoft, Google, Apple, Amazon and Facebook, and all five of these companies have their own designers and architects for their data centre projects, the social networking giant looks like the best fit for this particularly huge golden slipper. Out of these possible companies, four of them tend to favour more square designs, and Facebook’s hyperscale facility in New Albany, Ohio has a near-identically shaped access road.

Lastly, while Google and Microsoft both have facilities in the country, which is widely seen as the crossroads of European digital infrastructure, Facebook does not.

More official details about the project are certain to emerge in time, but it may be quite the wait, as Stijn Grove, of the Dutch Data Centre Association, said to AD. “Here in Europe we are less difficult about that. American companies fear they could jeopardise the process if their name becomes known. They don't want to take any risks.”

Which cooling system is best for your data centre?